Zakynthos or Zante (from Venetian) is a Greek island in the Ionian Sea. The island’s nickname is “To Fioro tou Levante” (Italian: Il fiore di Levante, English: The flower of the East) given by the Venetians.

Zakynthos lies in the eastern part of the Ionian sea, around 20km (12mi) west of the Greek (Peloponnese) mainland. It is the third largest of the Ionian Islands. Zakynthos is a separate regional unit of the Ionian Islands region. Zakynthos is about 40km (25mi) long and 20km (12mi) wide, and it covers an area of 410km2 (158mi2) and its coastline is roughly 123km (76mi) in length. Its coastline is approximately 123km (76mi) long. According to the 2020 census, the island has a population of 39,621. The highest point is Vrachionas, at 758m.

Zakynthos is a tourist destination, with an international airport served by many charter flights from Europe.

The western half of the island is a mountainous plateau and the southwest coast consists mostly of steep cliffs. The eastern half is a densely populated fertile plain with long sandy beaches, interrupted with several isolated hills, notably Bochali which overlooks the city and the peninsula of Vasilikos in the northeast.

The capital, which has the same name as the prefecture, is the town of Zakynthos. It lies on the eastern part of the northern coast. Apart from the official name, it is also called Chora (i.e. the Town, a common denomination in Greece when the name of the island itself is the same as the name of the principal town). The port of Zakynthos has a ferry connection to the port of Kyllini on the mainland. Another ferry connects the village of Agios Nikolaos to Kefalonia.

Minor uninhabited islands around Zakynthos included in the municipality and regional unit are: Marathonisi, Pelouzo, Cameo in the Laganas bay; Agios Nikolaos, near the eponymous harbor on the northern tip; and Agios Ioannis near Porto Vromi on the western coast.

The name, like all similar names ending in -nthos, is pre-Mycenaean or Pelasgian in origin. In Greek mythology the island was said to be named after Zakynthos, the son of a legendary Arcadian chief Dardanus. The ancient Greek poet Homer mentioned the island in the Iliad and the Odyssey, stating that the first inhabitants of it were the son of King Dardanus called Zakynthos and his men. Before being renamed Zakynthos, the island was said to have been called Hyrie. Zakynthos was then conquered by King Arkesios of Kefalonia, and then by Odysseus from Ithaca.

Zakynthos participated in the Trojan War and is listed in the Homeric Catalogue of Ships which, if accurate, describes the geopolitical situation in early Greece at some time between the Late Bronze Age and the eighth century BCE. In the Odyssey, Homer mentions 20 nobles from Zakynthos among a total of 108 of Penelope’s suitors.

Zakynthos was inhabited from the Neolithic Age, as some archaeological excavations have proved.

Later on, a treaty was signed that made Zakynthos an independent democracy, the first established in Greece, that lasted more than 650 years.

In 459, the island was plundered by the Vandals under Geiseric, who carried off 500 local aristocrats. Zakynthos appears to have been spared from the Slavic invasions of the 6th–7th centuries, as no Slavic names are attested on the island.

During the middle Byzantine period (7th–12th centuries), Zakynthos belonged to the Theme of Cephallenia, and the local bishopric was likewise a suffragan of Cephallenia (and later of the Metropolis of Corinth). In 880, the Aghlabids raided Zakynthos, but were defeated by the Byzantine navy under Nasar. Plundered by the Pisans in 1099, it was captured by Margaritus of Brindisi in 1185, and thereafter formed part of the County palatine of Cephalonia and Zakynthos. A Latin bishopric was installed on the island, alongside the Orthodox one.

In 1864, Zakynthos, together with all the other Ionian Islands, became a full member of the Greek state, ceded by Britain to stabilize the rule of the newly crowned Danish-born King of the Hellenes, George.

During the German occupation of Greece, Mayor Loukas Karrer and Bishop Chrysostomos refused Nazi orders to turn in a list of the members of the town’s Jewish community for deportation to the death camps. Instead they hid all (or most) of the town’s Jewish people in rural villages. According to some sources, all 275 Jews of Zakynthos survived the war. Both were later recognized as Righteous among the Nations by Yad Vashem. In contrast, over 80% of Greek Jews were deported to death camps and murdered in the Holocaust. 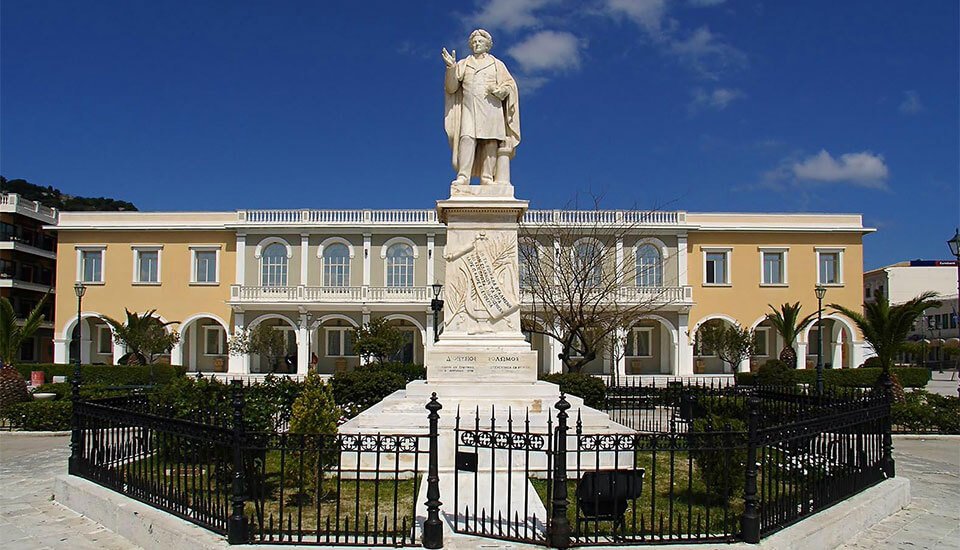 The island has a long musical tradition. It was a precursor of opera and operetta in Greece and on the island it constituted links between nobles and the rest of the people. In 1815 it saw the establishment of the first Music School in Greece. During the first Olympic Games (Athens 1896), the Music Band of Zakynthos took part in the event. It was the period when composers of Zantiote origin, such as Domeneginis Kapnissis, enjoyed some fame in Europe.

The novel Among the Olive Groves, by Chrissie Parker is primarily set on the island of Zakynthos.

An early literary work from the island is the Rimada, a 16th-century romance in verse about Alexander the Great. Notable early writers include Tzanes Koroneos, author of Andragathemata of Bouas, a work of historical fiction; Nikolaos Loukanis, a 16th-century Renaissance humanist; Markos Defaranas (1503–1575), possibly the author of the Rimada; Pachomios Roussanos (1508–1553), a scholar and theologian; and Antonio Catiforo (1685–1763), a grammarian and satirist.

Towards the end of the 18th century, the so-called Heptanese School of Literature developed, consisting mainly of lyrical and satirical poetry in the vein of Romanticism prevalent throughout Europe at the time. It also contributed to the development of modern Greek theatre. An important poet of this school was Zakynthian Dionysios Solomos; another was Nikolaos Koutouzis, who also figures prominently in the Heptanese School of Painting. Others include Georgios Tertsetis (1800–1873), politician, poet, and historian. 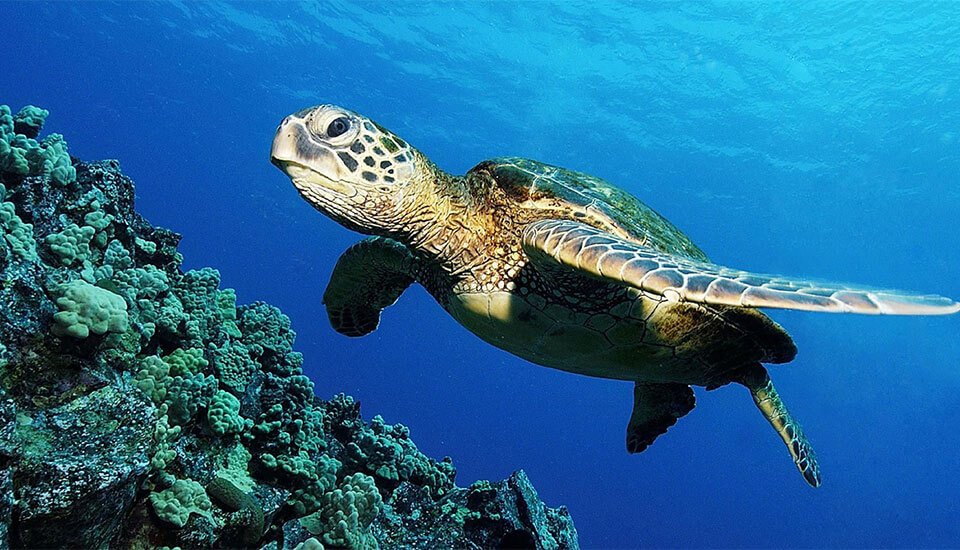 The mild Mediterranean climate and plentiful winter rainfall endow the island with dense vegetation. The principal agricultural products are olive oil, currants, grapes and citrus fruit. The Zante currant is a small sweet seedless grape that is native to the island.

The Bay of Laganas is the site of the first National Marine Park and the prime nesting area for loggerhead sea turtles (Caretta Caretta) in the Mediterranean. Every year at the beginning of June, the female turtles come to the southern beaches in order to bury their eggs in the sand. The incubation period for the nest is approximately fifty-five days, after which time hatchlings emerge from the nest and make their way to the sea. The survival rate for hatchlings is very small, and it is estimated that only one in one thousand hatchlings that enter the sea lives to adulthood. Each nest contains around one hundred to one hundred and twenty eggs, each of which are around the size and shape of a ping-pong ball. Female turtles begin to lay nests at around twenty to thirty years of age. 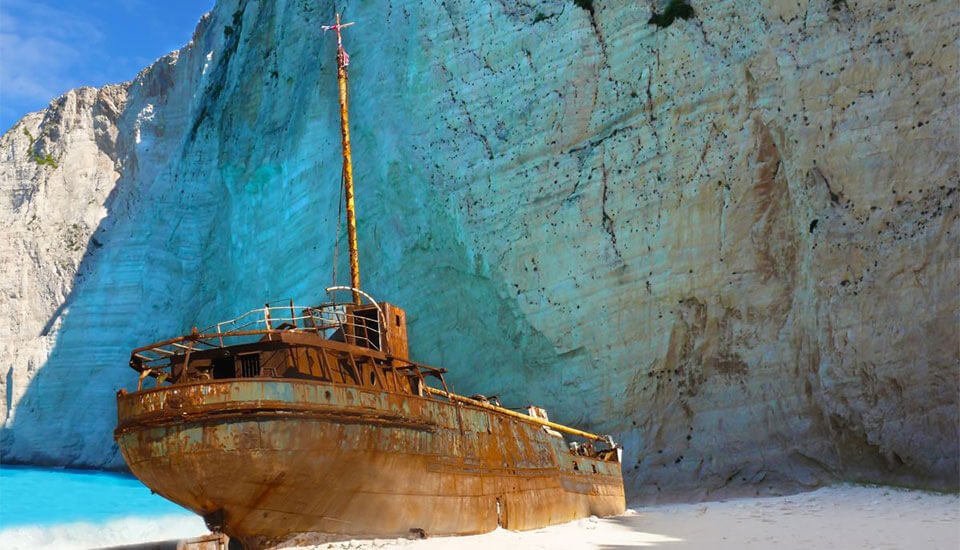 The most famous landmark of the island is the Shipwreck beach (Navagio). It is a cove on the southwest (northwest near village of Anafonitiria) shore, isolated by high cliffs and accessible only by boat, or parachute. The beach and sea floor are made of white pebbles, and surrounded by turquoise waters. It is named after a shipwreck (MV Panagiotis), which sunk on the shore around 1980. The ridge area from Anafonitria has a small observation deck which overlooks the shipwreck, and there is a monastery nearby. The unique and stunning visuals of the location are a favorite for BASE jumpers, and each year a major event in the BASE calendar is held at Navagio, around the end of August.

Numerous “Blue Caves”, are cut into cliffs around Cape Skinari, and accessible only by small boats. Sunrays reflect through blue sea water from white stones of cave bottoms and walls, creating visual lighting effects. Keri is located in the far south of the island. It is a mountain village and has a lighthouse in the south. It includes a panorama of the southern part of the Ionian Sea. The whole western shore from Keri to Skinari contains numerous interesting rock formations, including arches.

Northern and eastern shores contain numerous wide sandy beaches, some of which are attract tourists in summer months. The largest resort is Laganas, whose beach stretches around 10 km (6 mi). Small Xigia beach in the north is noted for its underwater springs rich in sulfur, giving a distinct odour.

Bochali hill above the Zakynthos town contains a small Venetian castle and offers panoramic views onto the town. Strani’s hill located on the other side of Bochali is the place where Dionysios Solomos wrote the Greek national anthem.

Marathonissi (also known as “Turtle Island” because of its turtle-like shape) is an islet near Limni Keriou (the beach of village Keri; also known as Keri Lake). It contains tropical vegetation, turquoise waters, beaches, and sea caves.

The island offers exceptional attractions for scuba divers. Many of the dive sites are cave dives around the island. Further, a wide range of marine life can be found, common among being moray eels, monk seals, octopus, and loggerhead turtles (Caretta Caretta).