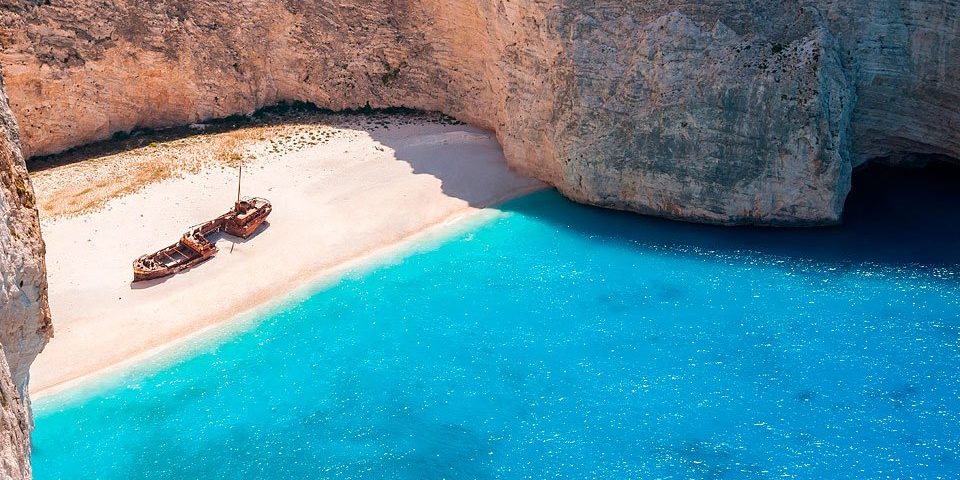 Shipwreck Beach or Navagio Beach is located in a cove, sometimes referred to as “Smugglers’ Junction” and is located in the northwest corner of the island of Zakynthos.

The Shipwreck or “Panagiotis”, is a shipwreck on the isolated coast of Saint Giorgis, now popularly known simply as Navagio Beach, and today it is one of the most interesting attractions of the island. The beach is located in an inaccessible place and can only be reached by sea.

The ship was spotted on 5 October 1980 by a Maritime Economic Police patrol boat and found to be carrying contraband cigarettes. The value of the approximately 2,000 cigarette boxes was estimated at 30 million drachmas (88,041€). The crew claimed that, after the ship had been traveling between Kefalonia and Zakynthos for three days in bad weather conditions, due to a mechanical failure they ran aground at Cape Schinari. For two days they remained stranded in a cave and then found refuge in the village of Volimes. 29 locals were convicted of looting the cargo and valuable equipment from the wrecked ship.

In the beginning, the residents were worried because of the environmental disaster that they believed would be created by the particular ship with its cargo, and by extension also to the island’s tourism. But a short time later it became a pole of attraction for domestic and non-domestic tourists, while it is ranked among the most beautiful beaches in Greece and the world.